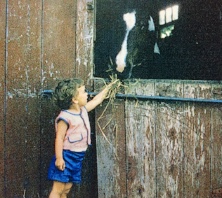 When did we cease to ‘talk’ with with our animal kin? Why can so few of us still understand them? And how can some of us not comprehend that the animals and fish and birds and insects have any sentience at all? And of course there are so many times when we forget that our fellow humans feel what we feel… how can this be and how can we heal it? “Love and Bananas”, a film made this year about elephants in Southeast Asia, aroused in my heart all these questions.

Lek is a small Thai woman born to a family that has captured, broken and trained Asian elephants for generations. She came to the point where she simply could not bear the cruelty of the methods systematically used to quell these noble beasts. Defying her family, she went to the media with torturous photographs of how every elephant in captivity is crushed into submission. She then went on to start her own elephant sanctuary in Thailand. 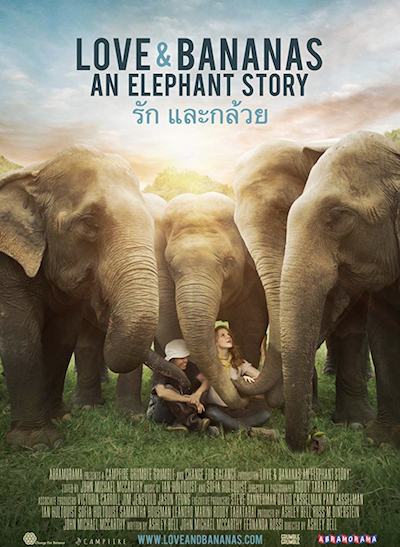 The film, with its protagonist Lek, is a worthy successor to one of my favorite books, “Elephant Whisperer”, about the author who saves a herd of wild, raging African elephants from being killed by the government, and eventually gains these giants’ love and trust in his animal sanctuary in Kenya.

As our movie unfolds, a young American woman comes to visit Lek and her elephants, learns their plight, and gets to go with Lek on an elephant rescue. Our hearts ache at the mistreatment of these magnificent animals, and thrill with the realization of how intelligent, sensitive and loving wild animals can be. Then there’s the remarkable Lek, who was cast out of her human family for protecting her elephant kin. What a sterling example of a human being in rapport with the animal kingdom.

Are we born able to commune with the creatures around us? I can’t remember. I look at how easily our one year old grandson gets along with the family dog, who is a big bruiser twice his size, brushing past him on his unsteady little feet and never actually knocking him down, going into distress when she hears him cry. I watch him feed her off his highchair tray as naturally as he feeds himself. Neither of them can speak a word. Do they ‘talk’? I wonder.

What do I remember? I recall having an ant farm where I could watch these busy, dedicated workers create their elaborate tunnel home in the sand between two pieces of plexiglass. My best friend at school and I used to save bits of our cafeteria lunch and then feed the anthills out on the playground. One of my most connected animal moments happened in the wee hours of the morning when I was present for our cat Miss B (for Beautiful) giving birth to a litter of tiny wet, blind kittens. I felt as exultant as I imagine she did!

I recall raising silkworms, which are actually caterpillars, and feeding them mulberry leaves until they spun their silk cocoons. Thank goodness my mom had us watch them go through their natural life cycle to emerge as heavy, fluffy whitish moths, rather than plunging the living cocoons into boiling water to be able to unroll their silk thread, unbroken.

That’s not to say I was always kind-hearted with creatures as a child. I guiltily recall the sick glee I took in pouring salt onto garden snails and watching them fizzle to death. Now THAT is just the kind insensitivity to the animal world I am lamenting. 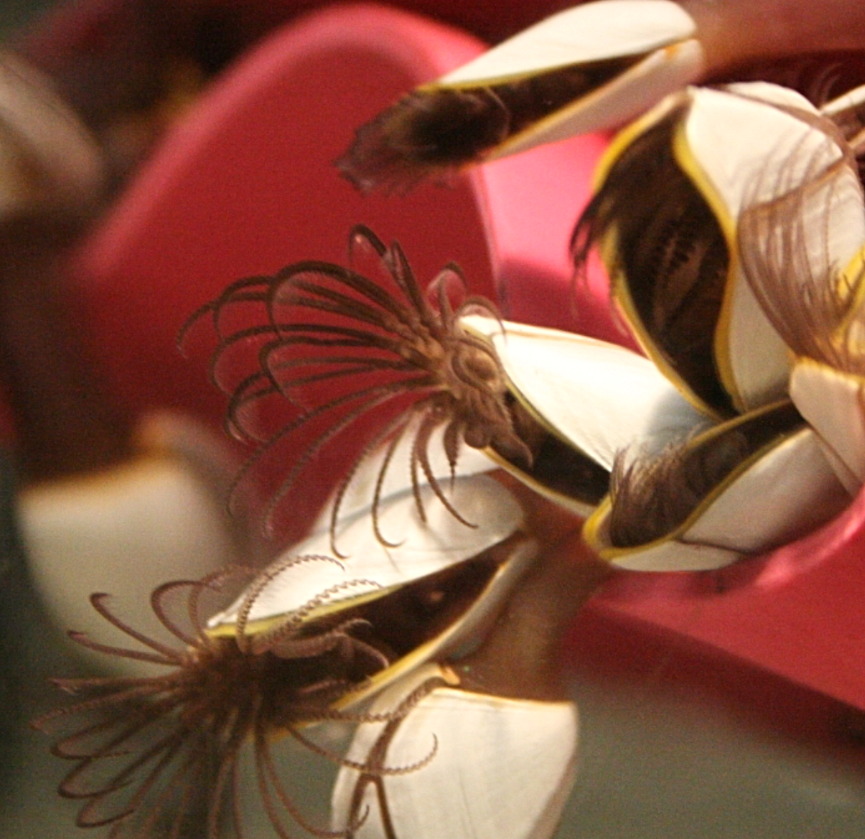 My keenest early recognition of the sentience of the animal world came when I was a young teen. I collected what I thought were old barnacles from the beach, then dropped them into a pot of boiling water to sanitize them. As I peered into the steaming water I saw them send out delicate little feelers, feather like, reaching out as if to call ‘Help! Save us’, and I knew it was too late to rescue them. Such a heavy thud of feeling inside me that I was unintentionally boiling these innocent creatures to death.

I didn’t have the sensitivity to realize there was a living being inside the barnacle to begin with though. So whether I was ever able to communicate with animals, I don’t really know, but I couldn’t by that time. I’ve USUALLY been kindhearted to their suffering, and I eventually had to become a vegetarian in college, realizing I could not kill the fish, chicken or cow, so had no right to eat it.

Really though, I didn’t have any sense of animals’ intense awareness level until my experience trying to save our dying koi fish a few months ago, when she opened up for me a brief heart view into the living universe that I had never known before. Click here to read that story. Whether my young child self could talk with the animals, I don’t remember, but as an adult my consciousness has been too dense, too insensitive to normally pick up what animals have to ‘say’. I see that it’s time to change that.

People like Lek and an animal communicator named Anna Breytenbach – see her remarkable video below – are deeply attuned to the animal world all the time. In one of the most touching scenes of the film, Lek rescues not just an elephant, but the heart of an elephant trekking company owner who, like his family before him, has been mistreating elephants his whole life. It must be possible for all the rest of us. If you haven’t already, inspire yourself by watching “Love and Bananas”!

Email me – I always love hearing from you.