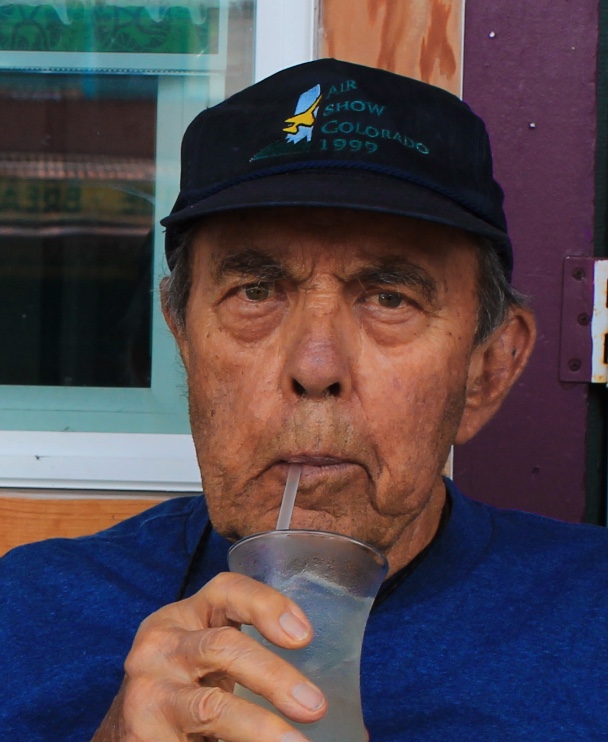 I often call him Eeyore – you know that droopy eared, sad-sack donkey in Winnie the Pooh. His real name is Bob, and he’s my husband’s step dad – the only grandfather our kids ever knew on that side of the family. Seldom, if ever, the life of the party, Bob’s a quiet man who verges on stubborn and grumpy more frequently these days. And yet, sometimes he surprises me.

At age 62 myself, I’ll have to live another half of my current age to catch up to where Bob is now at age 91. That’s a long time to live! He sleeps and takes some of his meals at a very nice senior home in Santa Barbara, California. He’s just recently had to give up bike riding, and his long walks have gotten much shorter.

He drives home during daytime hours to the house he lived in with Cliff’s mom for so many years. Our son Shankar and his fiance DD who now live there, welcome him daily with good cheer. They always seem able to find the humorous side of Grandpa Bob. Well, not always. Shankar finally had to set Bob straight about being curt and demanding to the waitresses when they went out for dinner together. Bob has since mended his ways on that front… most of the time!

Finding subjects of conversation with Bob is not easy for most of us. He holds politically and socially opposite viewpoints from every other person in the family – so that closes off most topics regarding the daily news. Shankar and he like to occasionally travel to Los Angeles to take in an A’s baseball game. Not being a sports person, I lack that area of dialogue that Shankar shares with him. Oh dear, what to talk about?

Bob is intensely interested in the weather, and keeps a rain gauge at the house. As a professional scientist and a former sailor who spent many happy summers taking friends on boating excursions, Bob studies weather news intently. So at least there’s that. When I call him every Sunday morning, I get a lengthy description of the changing temperatures and general drought conditions there in California. Of course the Santa Barbara flooding (rare) and fires (frequent) add spark to those conversations, especially when Shankar is out fighting those fires. He’s so proud of his grandkids.

The recent volcanic activity on Hawaii island fascinated him when he came to visit the last couple weeks. Bob wanted to track the lava flow mile by mile when he was here visiting. We even set up a trip for him, accompanied by a much younger friend of ours, to helicopter over Fissure 8 and see the lava flowing down to the sea. He loved that!

He most enjoyed going to work with our younger son Govi to his construction job sites. Our usually taciturn Bob was so thrilled about spending time with Govi, being part of the workflow, he came back to the house saying he’d just spent 2 of the best days he could remember in years. He was jubilant!

It’s rough being a widower. Cliff’s mom Sue was the sunshine of his life, and she’s been gone now for nearly four years. He’s managed to keep himself on a pretty even keel, psychologically and physically, by assiduously following his routines of getting out and about. But he’s still quite a loner. Even living in the senior home for all this time, sharing his dinner in the dining hall at tables with other residents almost every night, he still hasn’t managed to learn the name of a single other person in the facility. He’s just not what you would call a cozy, easily approachable guy.

Then there’s the matter of his health, which he frets over constantly. He keeps up a constant regimen of doctors appointments, checking his own blood pressure daily. He self-diagnoses all the time and then takes himself to the emergency room for “consultations” as he calls them, when he thinks it will be too long until his next appointment. Of course, he always thinks he knows more than the doctors do, so that can lead to interesting developments. And who am I to say? He’s made it into his nineties with a sharp mind and functioning body!

On the last day of his visit here, the rest of the family was all off island for Govi’s paddling race. I was determined to devote the majority of my time to making it a great day for Bob – on my one day off of the week, and yes, I was feeling like something of a martyr and feeling ashamed of myself about that. Anyway, I planned a trip to Bishop museum, a nice drive, a good dinner somewhere…. Some things we could enjoy together.

Bob started the day with the papaya he had asked me to buy as a special treat he never gets in Santa Barbara. He found that delicious. And that was the last enjoyable part of the day.

He next asked to be taken to the emergency room for a “consultation”. When I came to pick him up, they told me he was back in the emergency room because he had undone a procedure the doctor had performed to begin with. No time was left in the day by the time we got home, and of course he was tired, poor guy. After dinner, he asked for a third E/R visit of the day, which got us out shortly before midnight. (He’s doing fine now, thanks for wondering.)

We left for the airport the next morning at 5:30 am to put him on his flight home. Here’s when I got surprised. He apologized for leaving such a big mess to clean up – I wasn’t expecting that. Then our normally non-demonstrative Bob gave me not one but TWO big bear hugs, thanked me for being such a good hostess and told me he loved me!!!

That from Eeyore. Wow. I like it when people don’t easily fall into my expectations of them. 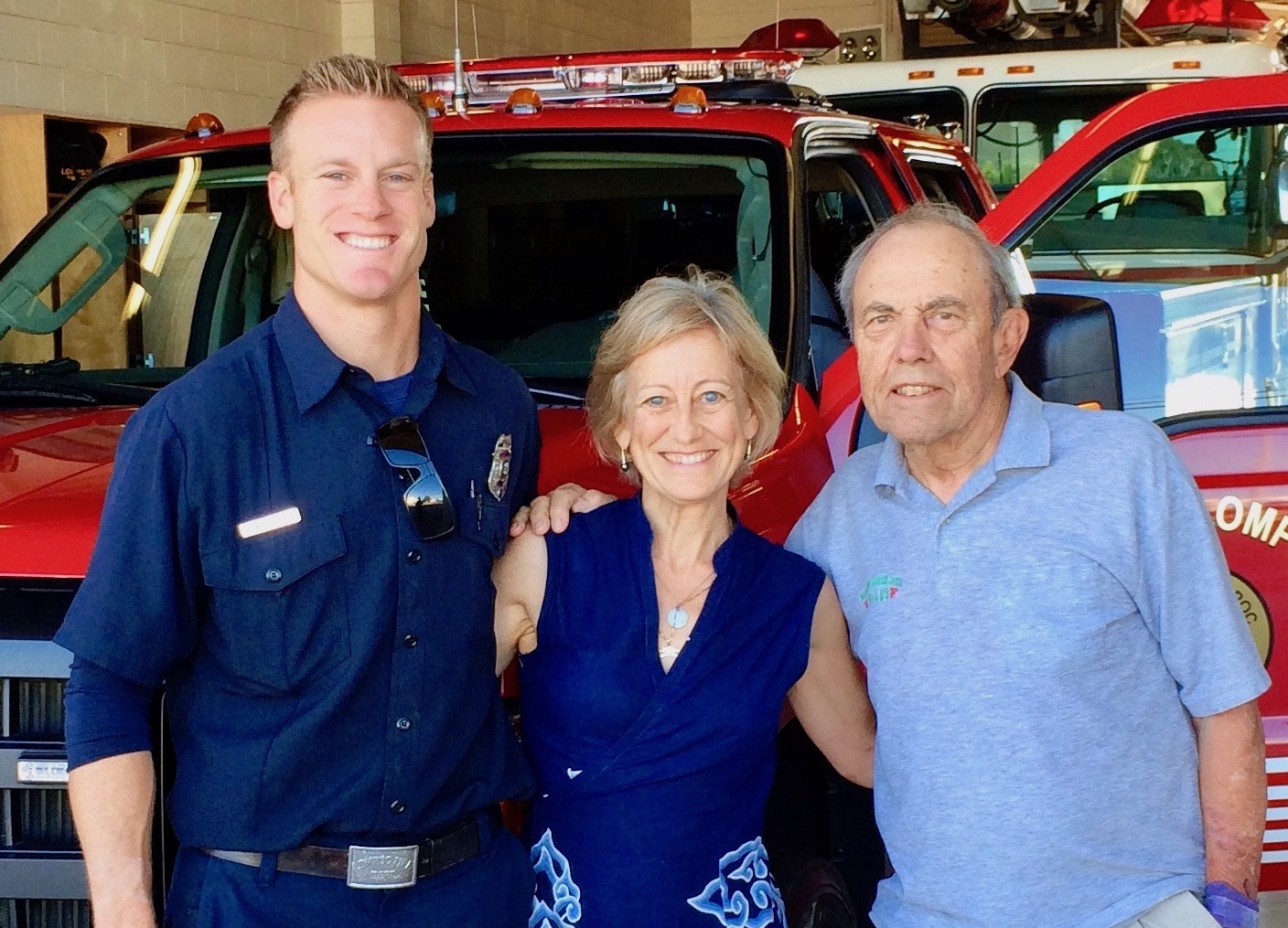 When I told our son Shankar this story, he was not surprised by any of it, including the happy ending. Shankar summed it up: “He has the redeeming value of being a great grandpa. He may not get along well in bigger groups but one-on-one it’s not hard to see he has a pure soul and heart of gold.”

And so I continue on my journey to more fully understand the human heart.

Dancing in Joy and resting in Stillness with you,

Just hit Reply – I always love hearing from you.