Forty years is a long time to be apprehensive about something. Yeah, I’ve had a love/fear relationship with India for at least that long.

I’m not sure when I first heard about India – was it when I studied the religions of the world in my Unitarian Church Sunday school class at about age 5? I recall seeing 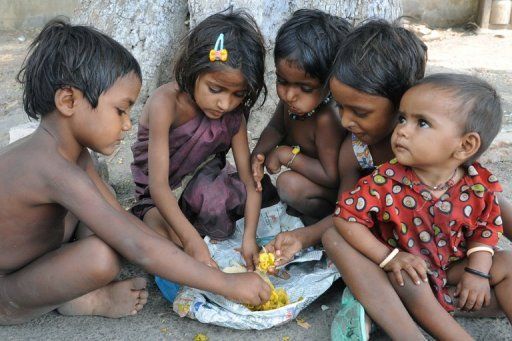 the OM symbol. Maybe I was even younger when my mother would encourage me to finish everything on my plate, to be grateful for the good food I had, unlike the starving children in India. At some later time in my childhood, Mom told me about the only truly unselfish person she had ever heard of: the Indian father of nonviolent revolution, Mahatma Gandhi. My dad took several trips to India to study yoga with Iyengar.

As a freshman in college I heard about a brilliant lecturer at UCSB who always wore red, orange or gold shirts and who always received a standing ovation. Once I took his class, I found that he was not only a true genius, he was from India. He inspired me to start on my spiritual life path and gave me even greater respect for Gandhi. While he taught from and interwove all of the world’s traditions, much of what I learned from him derived from his Indian homeland.

He was also responsible for bringing the Dalai Lama to Santa Barbara several years later, enabling me to personally meet His Holiness, and more importantly to become aware of the Dalai Lama’s exemplary life of returning love for hatred, living the vast majority of his life exiled by the Chinese from his native Tibet, finding safe harbor in…of course, Mother India. 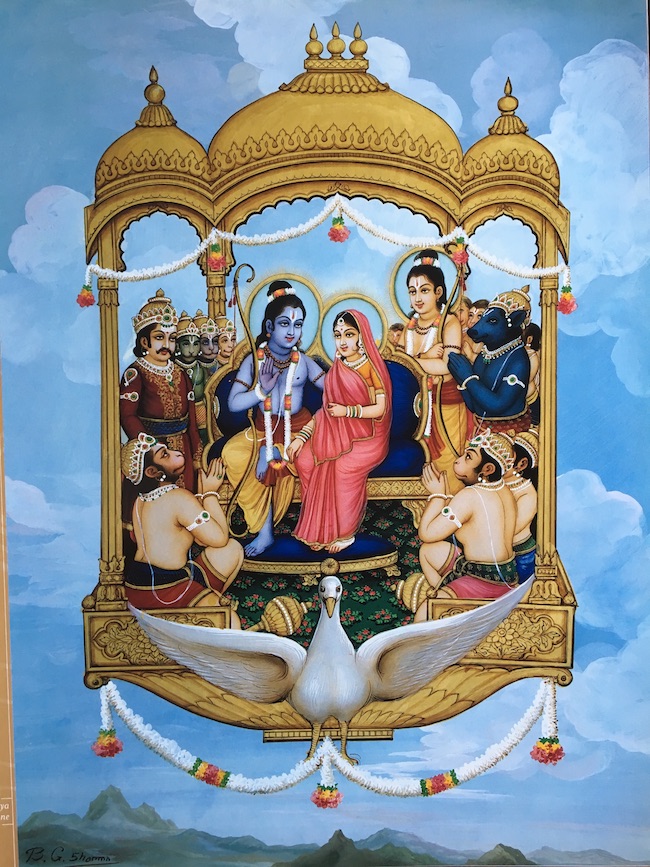 I’ve spent much of my adult life reading and even producing plays of Indian mythology and the two great epics, the Mahabharata and the Ramayana, filled with valorous princes and brave princesses, fantastic gods, demons, superheroes, and sumptuous palaces. I’ve enjoyed the immense sophistication of classical Indian dance, music and cuisine. We even gave all three of our children Indian names.

I’ve also read such books as The City of Joy about the desperately poor inhabitants of the slums of Calcutta, the kind of people Mother Teresa rescued from the edge of death or comforted through the end of their wretched lives – and yet from a certain perspective, they could be said to live in joy. Since I was born, India’s population has grown from less than half a billion people to over 1.3 billion people now. Many are crowded into teaming cities where disease is rampant, the gutters can reportedly flow with raw sewage, and children are sometimes deliberately maimed to make them more effectively pathetic beggars. Whew. Unreal. 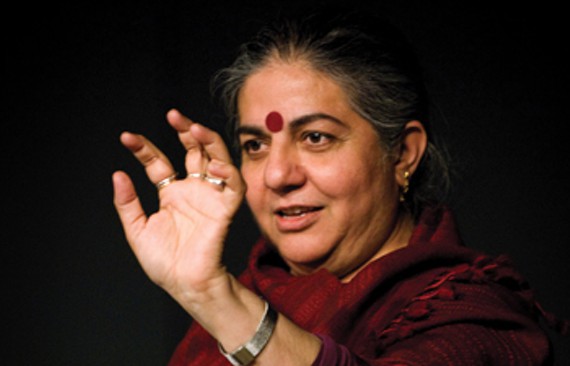 And I’ve met the valiant Vandana Shiva from India, a tiger-like force of a woman who has almost single-handedly battled industrial giants like Monsanto, creating with the farmers seed banks of heritage seeds, crusading to make trademarking of seeds illegal, thwarting GMO’s from taking over India’s rich agricultural tradition, and fighting to save subsistence farmers from the ruination of Coca Cola stealing their irrigation water to make softdrinks. Imagine the stuff SHE is made of! 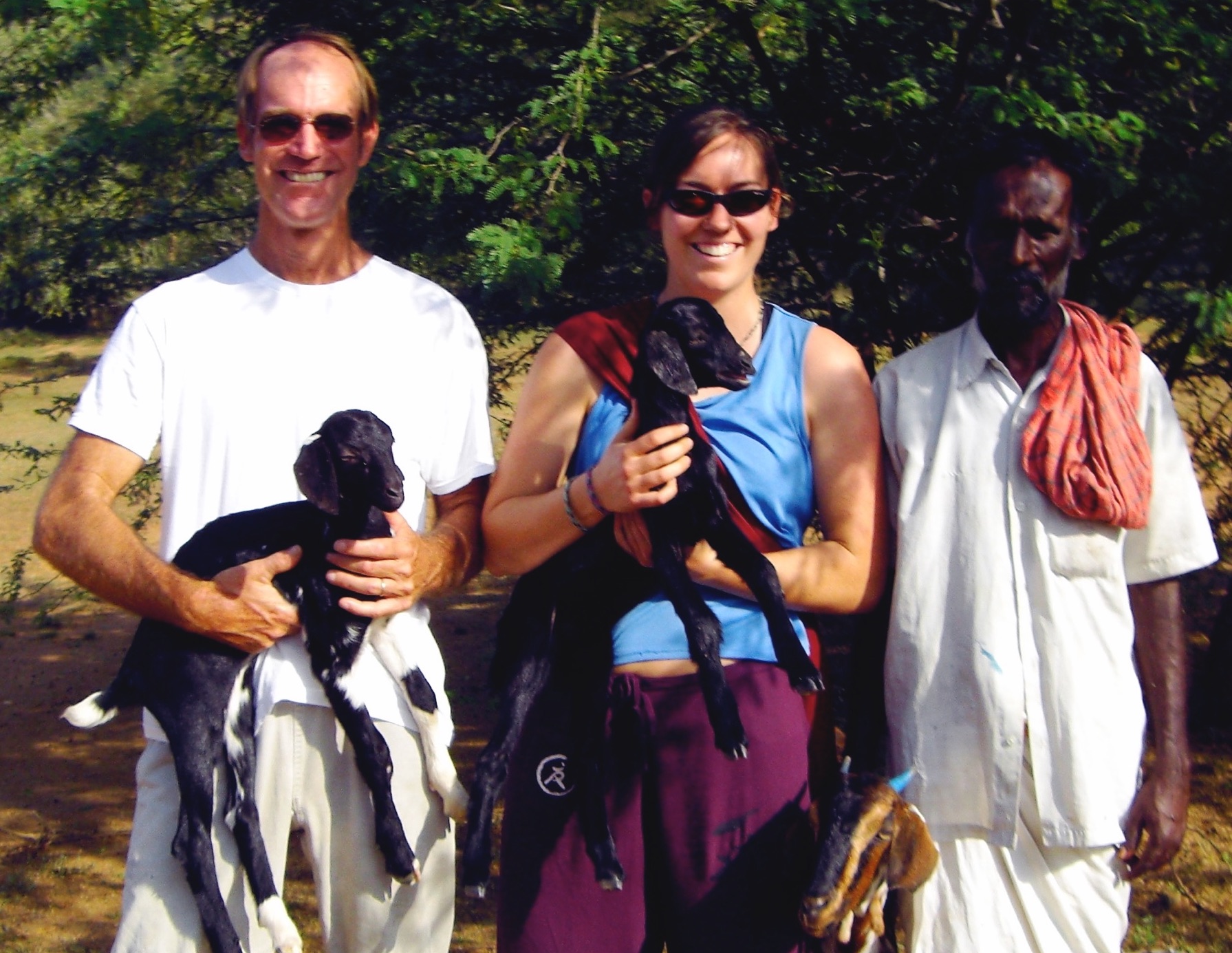 My closest shave with a trip to India myself was 9 years ago when our daughter travelled to the Thar desert of Rajasthan to do volunteer work with impoverished villagers. Cliff protectively accompanied her there, and I was supposed to go, too. But the chance of contracting a life-threatening disease and specter of facing thousands of crying street urchins was too much for me, and I got too sick to travel before I had even purchased my ticket. I preferred the idyllic ancient India of my story books to the harsh reality of India today.

What changed this year, I don’t know. After numerous invitations, I finally accepted an offer from our dear friend Jivatma to give us a tour of southern India – Tamil Nadu – where she grew up. So at age 61, I summoned my courage and embarked with Cliff on 3 week trip to that mysteriously alluring and alarmingly repelling land. 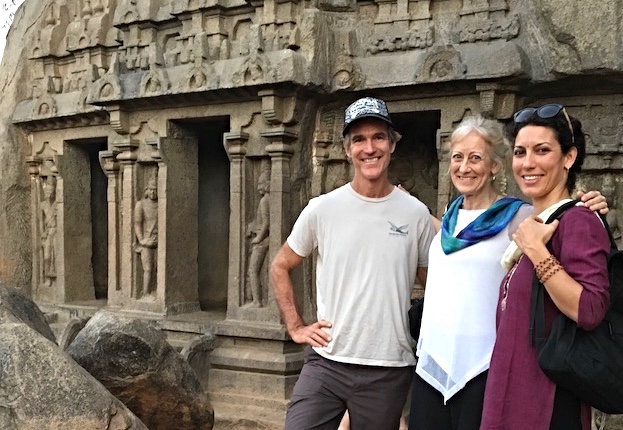 I’m out of writing space this month to tell you yet of our wonderful journey. Suffice it to say that by the end of our trip, I truly had trouble saying goodbye to the place, the ethos, the eyes, the saris, the smiles, and the people of India. I really wasn’t ready to leave. I woke up the first morning at home, not quite oriented and eager for the next day’s adventure: “Where are we going on pilgrimage today?” not even realizing I was back in my own bed!

So was all my fear for naught? I usually think of myself as a fairly brave person. Should I kick myself for not having made it to India earlier? I prefer not. Perhaps my apprehension protected me. Perhaps my first, seemingly-belated trip to India unfolded at precisely the right time in my life, with exactly the necessary ripeness to truly appreciate that magnificent land.

And maybe I wouldn’t have been so anxious if I’d thought the lady in the video below was going to be my flight attendant!

Tell me about a decision that took you a long time to make. How did it turn out for you in the end? 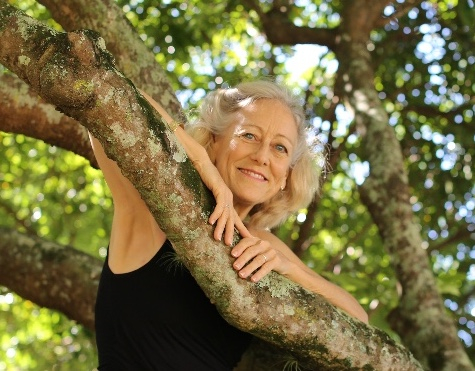 Renée Tillotson, Director, founded Still & Moving Center for teaching mindful movement arts from around the globe. She is inspired by the Joy and moving meditation she experiences in the practice of Nia, and by the lifelong learning shared at the Institute of World Culture in Santa Barbara, California. She intends that Still & Moving Center always be filled with laughter and friendship!