We often call our elder son Shankar ‘an animal’. Not exactly a flattering description, when I think about it.

Why do we say that? We mean he has the toughness of a bear…the fierceness of a wolf in the face of danger…the dauntless determination of a loyal dog. Basically, you just can’t stop this guy.

From the moment he was born, this kid has been overcoming adversity. Cliff describes the delivery room that day as a battlefield operating theater with blood everywhere. Let’s just say Shankar fought his way through a not-so-easy entrance into the world!

When I finally got to hold him, he felt like a bundle of live wires, he was so energy-charged.  Later, when we’d open the door into a room where little toddler Shankar was sleeping, we felt a temperature warmer than the rest of the house, just from the body heat he radiated.

At age five, Shankar stopped breathing with his throat swollen closed and the doctor had to yank out his tonsils. The next year, he broke his leg due to a rare bone tumor. It wouldn’t heal, so the surgeon replaced most of Shankar’s fibula with bone from the growth plate of his hip.  Through all that, no physical pain could raise a word of complaint from this tough little guy.

As soon as bone grew back, Shankar flung himself into Little League, basketball and soccer. Whatever he lacked in finesse, he made up for in gusto! At Junior Lifeguards, he won almost every race over sand or through water. In surfing, the bigger the wave, the better.

Shankar’s years from teens through college freshman were no walk in the park. I think he was determined to make his parents as tough as he was, taking us through many a harrowing experience. Talk to me if you ever despair of your child surviving into adulthood.

Out of high school, Shankar seriously considered the military. I told him that although we had brought him up with the Gandhian principles of nonviolence, if he truly believed that he was born to be a warrior, we would support that endeavor. However, I counseled, I was less concerned about the possibility of him being killed than I was about him having to live with the memory of taking someone else’s life. Shankar has always had a good heart – in that way he’s certainly NOT a beast.

Cliff and I suggested that instead of fighting people, he might look into fighting fires. That suggestion evidently resonated, and he tried a few fire science courses at a community college, but his ‘devil may care’ attitude prevented any progress. When his choices became irresponsible, we cut off financial support, and he found himself solely responsible for keeping himself alive, in every sense.

Once Shankar decided to apply his daredevil nature to something worthwhile, he emerged from his dark period. He set his sights high, passed fitness tests with off-the-chart scores, and earned a spot on the elite federal firefighting team, the Hot Shots. For the next 5 summers, he fought wildfires across the country. 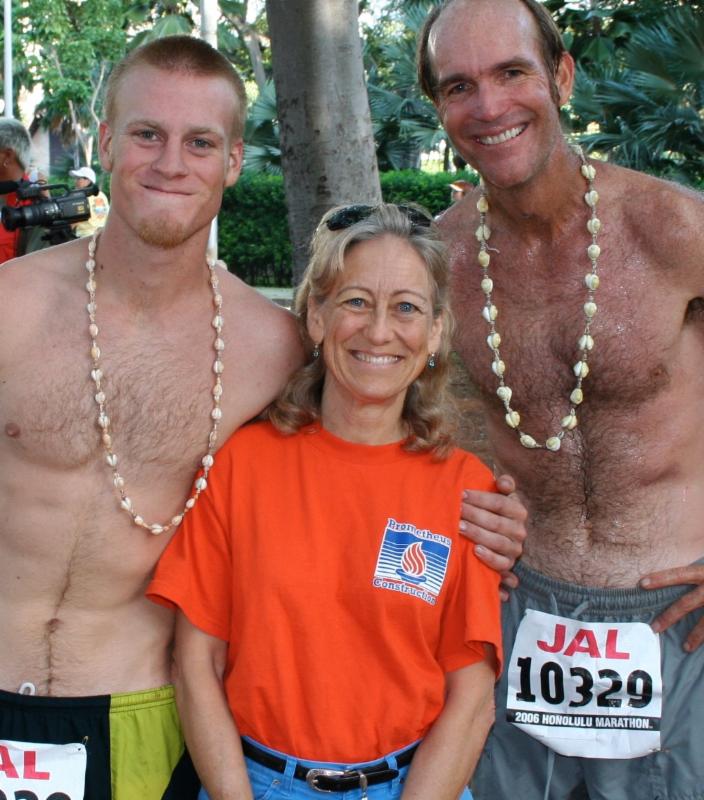 During the winter months he came to Hawaii and worked hard drilling into rock faces for our construction company. He continued his exercise regimen, running his first Honolulu Marathon in just 3 hours, unaware that his shoes were soaked with blood. Typical.

When he tried out for the ultra-elite federal smokejumping team, our Beast discovered that physical willpower alone was not sufficient to accomplish his goals. On the first day of training, his stress-induce lack of sleep and extreme over-exertion caused his kidneys to pump dangerous levels of toxins into his bloodstream, landing him into the hospital for 5 days and out of the program.

He paused, he reconsidered. As someone hoping to have a family himself someday, he realized that spending 5 months a year in the backwoods isn’t an ideal line of work.  For the first time in half a decade, he spent a summer doing construction instead of fighting fire, and wondered whether he should shift into steady year-round work in the family business.

The longer he stayed away from firefighting, the more distressed he became about losing his path.  Much as our son loved working with his family, he missed those walls of flame, and the bigger they were, the happier he was. Lolo, dis kid, yeah?

He kept losing sleep at night and had no way of quieting his mind. I told him about a friend of ours, Tony Bonnici, a life coach who teaches Zen meditation. Shankar was desperate enough to try it, and with his usual zeal he applied himself to deep belly breathing and rigorous self-study.  He became calmer and clearer.

His dream job, he realized, would be to live at home year-round, working for an urban fire department near Santa Barbara, California, where he grew up watching firefighters rescue people at the beach.  He also realized he needed a lot more training and experience to achieve his goal.

Shankar the uber-athlete became Shankar the dedicated student. He plowed through his remaining college courses to complete his fire science degree. Then he earned his EMT (Emergency Medical Technician) license. Becoming a paramedic required even more serious study. During all his book-worming, he never quit his normal workouts, such as hiking 5 miles uphill with a backpack carrying over 100 pounds of water. But what amazed us was how hard he was hitting the books!

Fast forward a couple years, through an ambulance job as a paramedic, and a small town fire-fighting job, to 2015 when Shankar was chosen from a field of 5,000 applicants to enter a grueling fire-fighting academy.  On May 22nd he graduated, achieving his life ambition of joining the Santa Barbara Fire Department.

So how do we feel about this ‘animal’ of ours? Powerful as a bear, fierce as a wolf and doggedly determined, Firefighter Tillotson is bravely serving his home community…and we are proud as punch!

Will Shankar sit back now and rest on his laurels? I doubt it. We’re just waiting to hear the next target the Beast sets his beady eyes upon!

Moving in Stillness and Resting in Joy with you,